Please note that December 24-26th and January 1st are non-business days in Lithuania. Banks will perform not all interbank transfers.

We use cookies in order to provide you with services that correspond to your interests as closely as possible. By clicking on the button “Agree” or continuing to browse, you will confirm your consent.
Accept Read more here

NEO Finance, AB, company code 303225546, registered office at Verkių 25C-1, Vilnius (hereinafter referred to as the Company), distinguishes itself from other operational risks specified in the business continuity plan by the fact that the Company's insolvency scenario may be influenced by external factors, for the occurrence of which the Company's proper performance of its activities may not have any significant impact. Considering this, the Company has developed an insolvency management scenario in the event of an economic downturn (hereinafter referred to as Insolvency Management Scenario), which balances the impact of the economic downturn on the Company's operations.

One of the main factors that may have a negative impact on the solvency of the Company is the possible economic downturn. In the event of an economic downturn, the Company's business volumes are likely to decrease. The main negative impact would be that, in the context of peer-to-peer lending, the ability of active investors to finance consumer credit is of particular importance. This insolvency management scenario assumes that investors' ability to finance consumer credit would be doubled.

The business model chosen by the Company, which meets the requirements of the Law on Consumer Credit (hereinafter referred to as the LCC) for the peer-to-peer lending platform operator, is manifested by the fact that the Company's largest source of income – the brokerage fee from the consumer credit recipient (hereinafter referred to as the CCR) is received only when CCR actually pays monthly consumer instalment. As the average maturity of consumer credit is 48 months and the longest maturity is 60 months, the Company will receive a monthly brokerage fee for at least 60 months, which can be calculated with sufficient accuracy. It is important to note that when CCR pays a monthly instalment, there is no risk of receiving this income, as these funds are the obligation of the CCR to pay monthly instalments before the end of the loan payment. In March 2019, the amount of the brokerage fee received by the Company in the future exceeded EUR 3.2 million. Please note that this amount is increasing every month.

The Company has developed a wide range of actions to ensure the Company's solvency even in the scenario of the economic downturn:

The action cost reduction plan in case of an economic downturn

The objective of the OCRP is to act to such an extent that the Company does not operate at a loss, i.e. a cash flow statement for each month would be balanced.

The renewed OCRP simulates the impact of the economic downturn on the Company's operations. The main assumptions are made about the following negative external factors: the growth of the number of insolvent consumer borrowers, decrease of new business volumes, increase of judicial costs.

The main assumptions of the test scenario are:

The impact of the economic downturn on the Company's operations

Due to the accumulated brokerage fee of EUR 3.2 million, which is postponed for future periods, even with a 40% drop in issuance volumes and a doubling in the number of insolvent consumer loans, NEO Finance would maintain a positive cash flow during the economic downturn and be able to live independently for at least two years. According to this calculation model, irrespective of the balance of funds existing on 31.03.2019, the Company would accumulate EUR 281 thousand in two years of economic downturn, if it starts on 01.04.2019.

[2] Operating costs consist of wage, IT development, rental and utilities, bookkeeping, auditing, mobile communication and Internet costs, and other costs.

The movement of funds during the investment is shown schematically in Annex No. 3.

An investor registered with the Neo Finance, AB Loan Club platform (hereinafter referred to as NEO), needs to replenish its personal IBAN account opened in investor's name in an electronic money institution, in order to start investing. It can be done in two ways:

2.    by making a money transfer from an account of any payment institution operating in the SEPA area to an electronic money account opened in the name of the NEO investor.

At the moment when the money is transferred to the investor's NEO IBAN account, electronic money is issued and the nominal money paid for it is stored in the Bank of Lithuania and Swedbank, AB. The amount of customer funds stored in Swedbank, AB bank does not exceed EUR 100,000. NEO Finance, AB, as a licensed electronic money institution, it keeps funds received from electronic money holders (investors) for the electronic money received by separating them from the funds of its institution and keeps the funds of its customers in a separate account opened at the Bank of Lithuania and a deposit account opened at Swedbank, AB (hereinafter referred to as Special Purpose Accounts). The funds of electronic money holders (investors) transferred to NEO are the property of the investors and could not be directed to the recovery of NEO's debts and creditors' claims if any. In other words, the electronic money of the investors does not fall into the non-Special Purpose NEO Accounts, which hold NEO's personal funds, so neither NEO nor its creditors can and would not have any claim against this money.

An investor with electronic money can start investing them or opt for an automated way of investing, where the criteria chosen by it would make the investment automatic or by choosing by itself to which consumer credits it wants to invest.

If there is more than one investor, then the final aggregated (electronic money amounts collected from many investors) electronic money is credited to the consumer credit recipient’s NEO IBAN account.

The movement of funds is shown schematically in Annex No. 4.

a.    If the consumer credit recipient does not request a recalculation of the interest, then in the system created by the NEO, a team that distributes the paid instalment to the investor and transfers its respective share to the specific investor starts to work, i.e. a credit transaction is created in the investor's electronic money account (an entry is reflected in the account overview) and its account balance is increased accordingly.

b.    If the consumer credit recipient asks to recalculate the interest, then the payment of the outstanding interest on the monthly instalments that was paid for by this consumer credit instalment is cancelled. A credit note is created on the consumer credit recipient’s account for the amount for which the payments were withdrawn and a debit note is created with the recalculated amount of interest covered from the recalculated amounts. At the same moment, the software developed by NEO divides the recalculated paid instalments to investors and transfers the respective part to a specific investor, i.e. a credit transaction is created in the investor's electronic money account (an entry is reflected in the account overview) and its account balance is increased accordingly.

It is noted that in the case of consumer credit repayment (as described in the case of the investment), the electronic money does not at any time fall into the non-Special Purpose NEO Accounts where NEO's personal funds are held. Even while electronic money is in transit, the status of this money is "money on the road" – the money moves from point A to point B, but they are by no means legally owned by NEO and NEO has no claims on these funds. Only the investor can claim the money in transit. These are paid for electronic money, but they are reserved until they reach the recipient and the recipient accepts them.

NEO ensures the flow of investor funds in such a way that in no case can funds from investors or other consumers go through non-Special Purpose NEO Accounts, so investors can feel safe about their funds. If NEO were faced with solvency problems, no creditor, or another third party would be able to encroach on funds held by investors and other consumers, both in terms of the balance of the account and in terms of returned payments, periodically obtained from consumer credit recipients.

NEO stores the funds of its customers (investors and consumer credit recipients, other business entities) in a separate account of the Bank of Lithuania and in the Swedbank deposit account as required by Article 25 (1) (1) of the Law on Electronic Money and Electronic Money Institutions. This ensures to investors (and other customers) that their funds will never be touched by third parties or NEO itself.

NEO ensures the inviolability of investor funds through the realization of an IT system that is programmed so that no employee can in any way make a transfer directly from the customer's IBAN account. Also, the employees of NEO are not able to connect to the accounts of the NEO customers funds held within Swedbank or the Bank of Lithuania. Payments are initiated by the user only through active actions, such as making a payment order or taking action by prior user instructions (e.g. automatic investment ads).

Only the bankruptcy of one bank – Swedbank, AB – would affect the temporary disruption of NEO activities.

Importantly, the deposit account opened on behalf of NEO holds a very small portion of investor funds, and that portion never reaches EUR 100,000. For this purpose, the company has implemented control that is performed by the IT system itself, in addition, the balance of this account is also reviewed by the management staff (financial manager, company manager).

Secondly, in the event of bankruptcy of Swedbank AB, the creditors would not be able to encroach on these customer funds, and they must be immediately returned to NEO users by law. The management of NEO would immediately request Swedbank, AB to transfer these funds to another credit institution or to an existing account within the Bank of Lithuania. The bank has to do this, according to the agreement with NEO, because it is precisely this procedure of depositing funds in the agreement with Swedbank, AB. In such a case, Swedbank, AB plays only the role of custody of funds and cannot use these funds in its activities. If the transfer of funds from Swedbank, AB would take more than two business days, NEO would fully cover the amount of customer funds stored in the account of Swedbank, AB from the funds of its own company funds, and then, upon receiving a transfer from Swedbank, AB would recover the funds. Therefore, it can be argued that the bankruptcy of Swedbank, AB would not cause negative consequences for the company or would be of minimal significance. 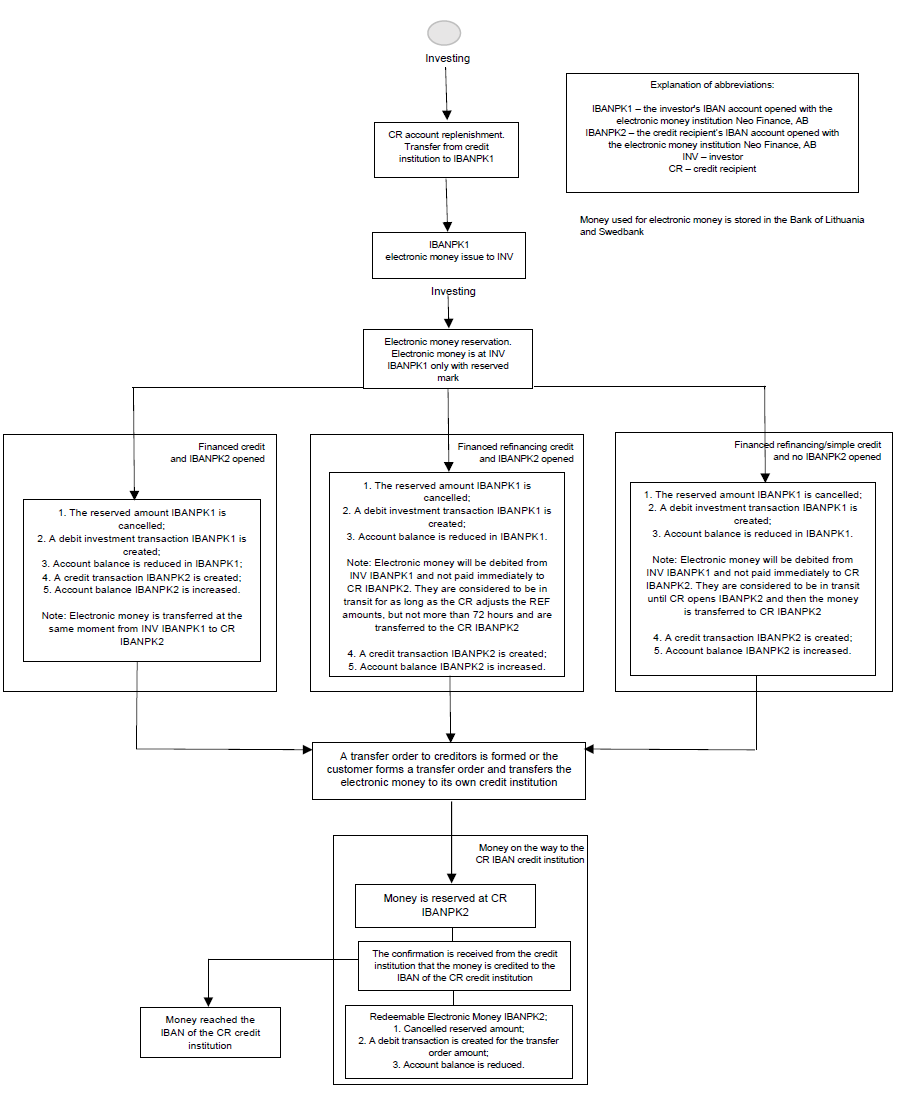